Hello everyone! I know our news updates have been few and far between as of late, but that's going to change starting now! Several really nice new features have been added by GSdx master Gregory lately. He has been working at breakneck pace and making amazing progress. This update will cover those as well as a few notable improvements by some of the other devs and some changes to how we are doing things going forward. The most visible of those changes for you guys is that we will now be writing monthly progress reports! Sometime around the end of each month/beginning of the next we will be posting a news update which covers all the major changes that have taken place during that month. For now, let's take a look at what has been happening in the world of PCSX2 since the last update!

The first and most noticeable changes are a couple of new GSdx hardware hacks Align sprite and Round sprite. Yes, hacks are generally not the best way to accomplish things in an emulator. However, the problems that these hacks solve were not solvable in any other way. PS2 games were never meant to be upscaled and because of that when we do several problems occur in many games. Some of these problems are unavoidable and require workarounds to fix.

The first one that we will take a look at is the Align sprite hack. For years, anyone who has played certain Namco games in PCSX2 was stuck either using native resolution or using very specific X resolutions, the largest being 1200. The reason was that if you upscaled in any other way you would end up with these nasty black vertical lines in the image. The reasons behind that are complicated, but can be summed up by saying It's simply the result of how the game engine does things. However, thanks to Gregory we don't have to deal with this issue any more! Now games like Soul Calibur II and III, Tekken, and Ace Combat can be upscaled as much as you want without issues. Simply enable the Align sprite hack in GSdx hardware hacks and voil! No more black lines! Games known to be corrected by it include: The second hack is the Round sprite hack. As above, this hack solves an upscaling problem that was not solvable in any other way. In many games that use a lot of sprites, upscaling produces noticeable glitches in the sprites. A very good example of that is the character portraits in Artonelico games. Before, when you upscaled you would wind up with little boxes around the characters faces. Many other games would have lines or other errors in their sprites when at any resolution aside from native. This again comes down to the fact that PS2 games were never meant to be upscaled. However, Gregory was up to the task and very quickly produced the Round sprite hack which solves all of these problems. If you have a game with many sprites and those sprites have issues with upscaling then it's very likely the Round sprite hack will solve that for you. Games known to be corrected by it include:

Here is a comparison screenshot showing Artonelico - Melody of Elemia: 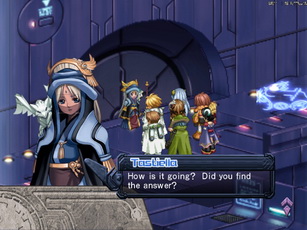 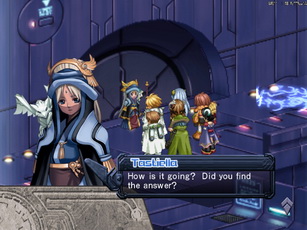 For an in depth explanation of both of these new hacks, please read the developer blog post here.

Now we come to something that is not a hack. Many of you who played certain games have encountered an error in the log such as Impossible blend for D3D: (Cd - Cs) * 7 >> 7 + Cd and while it produces no issue in playing the game, it does mean some effects are not being rendered or are being rendered incorrectly. A good example of this is Grand Theft Auto: San Andreas. This game was practically unplayable in hardware mode due to the graphical issues arising from the impossible blend. The reason we have this issue is that some of the things that the PS2 hardware can do are not very easy or even possible to do on PC hardware. Gregory however decided to tackle the problem. He realized that there are some features in OpenGL which would allow the impossible blend to be emulated correctly and efficiently. In no time at all he had quite literally made the impossible be possible! Currently the issue is fixed only in OpenGL, however Gregory and Refraction are working on fixing it in DirectX 11 as well. Games known to be improved by the correct blending are: For an in depth explanation of why we have "impossible" blends and how Gregory fixed that, please read the developer blog post located here.

Next we will take a look at some of the changes happening in the OpenGL realm lately. Gregory has been working very hard on this oft neglected backend and it really shows. As a result of that hard work it is now on par with the DirectX backend in most situations and even more accurate in some games. A good example of that is the shadow rendering in Shadow of the Colossus (pun not intended!). We can see from these images that it's the OpenGL backend that does it best now. However the OpenGL backend is also known for being much slower than our DirectX ones so even if it is on the same level accuracy wise the only people who would really use it would be Linux users, since they don't have a choice. Recognizing that issue, Gregory decided to pull out all the stops. By utilizing a formerly unused OpenGL feature and taking advantage of threaded optimization he was able to bring the OpenGL backend quite literally up to speed. Here are some numbers that show just how well they compare now (thanks go to Refraction for testing):

As you can see the results are practically epic! The one unfortunate caveat is this: It's currently only that fast on Nvidia graphics cards. This is due to only Nvidia's drivers currently supporting the Threaded optimization settings which needs to be on for this level of performance to be achieved. If AMD/Intel drivers start supporting that then it will work there too. Regardless, Gregory is always working on new ways to eek extra performance out of the OpenGL backend so don't fret if you can't make use of the current boost. Things will only get better as we go on!

Next up is something that is useful to those of us with tons of PS2 games but who don't happen to have unlimited hard drive space compressed ISO support. A while back, avih had added support for reading gzipped ISOs which was well received due to many of us having lots of PS2 games. Last month things got even better on that front when a coder by the name of unknownbrackets added support for CSO to PCSX2. You may be familiar with CSO files from using them with your PSP or PPSSPP they are basically a type of compressed ISO file. In order to create CSO files for PCSX2 you should use a program called maxcso which can handle files larger than 4GB. For creating gzip files you can use 7zip (change the Archive format: in the compression dialog box to gzip). Once you have your compressed file it can be loaded into PCSX2 via the normal method. If you are using a gzip file then PCSX2 will create an index the very first time you load the compressed game in order to speed up access times to various parts of the archive. The amount of space saved is not terribly huge per ISO but if you have many games then it can add up quite quickly. This chart shows the file size of a few games for uncompressed, gzip and CSO file types.

As you can see, gzip results in slightly smaller files when using ultra compression level. However it takes a lot longer to compress than CSO so there is a bit of a trade off. Regardless of whether you choose gzip or CSO, this feature is sure to be of good use to those of us with large collections of games!